Anime is usually thought of as an exclusively Japanese-style of animated feature film, and ever since the release of the science fiction movie Akira in 1988 it has certainly been the most widely distributed in the collective west.

The form is not unique to Japan however, and in China they have their own form of anime, usually known as "donghua." I have seen only one or two, such as the charming fantasy City of Lost Things, which appeared in 2021. The Chinese animation industry is also one of the few I am aware of to use the form to tell the stories of famous historical figures, like The Leader, a donghua biopic released in 2018 to mark the centenary of the birth of the philosopher Karl Marx, which focuses on the romance of the German philosopher with his wife Jenny, and great friendship with Engels.

You can watch the trailer with English subtitles here:

I have written several other articles specifically about comics around the world which can be read here:

The Revolutionary Art of Emory Douglas

A revolutionary in the true sense of the word, the American graphic artist Emory Douglas created strong, eye-catching imagery for the Black Power movement in the United States during the late 1960s and into the 70s, mostly for the BPP's newspaper The Black Panther. He wasn't just an artist who served the cause of Black Liberation through his art, but also served as Minister for Culture in the party from 1967 until the 1980s when the party was dissolved within a new climate of reaction.

Born in Michigan in 1943, Douglas was politicised at a young age after being caught up in the juvenile detention system, but found opportunities to explore his talent for print-making, and later more formal arts education, a skill he brought with him when he joined the Black Panther Party for Self Defence in 1967.

I cannot help but reflect upon how, growing up years later across the Atlantic, all the books I could find on the comix and art of the 1960s counter culture, including all of the reprints, would tend to focus on sex, drugs, music and mysticism. Growing up in the 1990s the comix of Robert Crumb and Gilbert Shelton were still very popular, including with teenagers my own age. The political satire discussed in both reprints of classic underground comix and histories of the period and the form however tended to focus on the anti-war movement or women's liberation, with the artists and journalists associated with the openly socialist Black Liberation movement barely mentioned.

This oversight is a shame, as there is a power to this imagery which should not be forgotten. I am encouraged that at the time of writing I understand Emory Douglas is still alive and some books and websites are certainly available about his fierce, revolutionary work.

For now, bathe your eyes in the revolutionary art of another time. 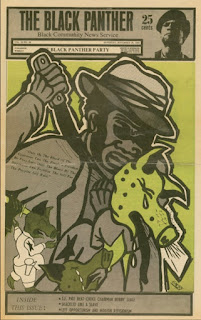 These savage cartoons make the editors of Private Eye look like the Cambridge-educated toffs they were (and, as much as I enjoy their work, Shelton and Crumb look like bourgeois liberals): 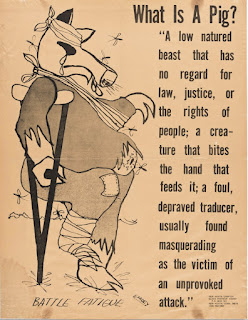 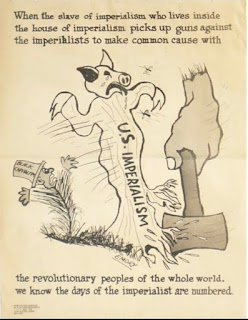 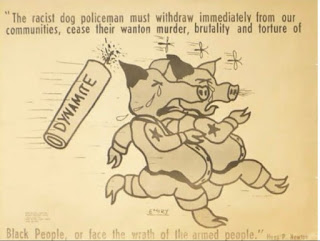 A  common theme in Douglas' work is the desire to link civil rights struggles within the USA to the wider anti-colonial struggle taking place at that time in Africa and Asia: 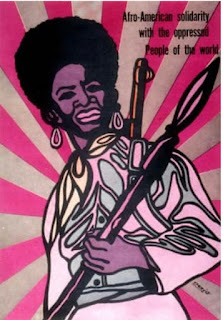 The title of this piece reminds me of a quote attributed to Ahmed Sekou Toure, the revolutionary socialist who was the first President of independent Guinea-Conakry: 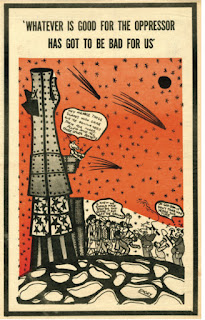 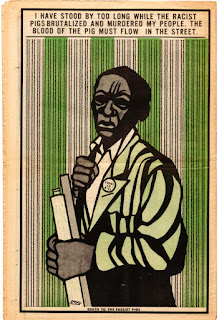 In this powerful image Douglas brings together the imagery of Black Power with Women's Liberation. This woman is clearly not about to be forced to choose between motherhood or the revolutionary, anti-colonial, anti-imperialist struggle, as capitalism today tries to make women feel guilty for having to prioritise motherhood/career: 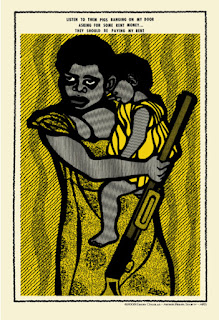 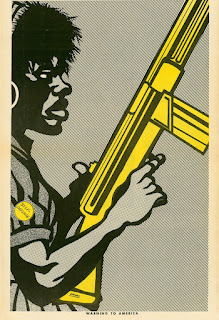 Here is a traditional newspaper-style cartoon that pulls no punches in its depiction of the cops: 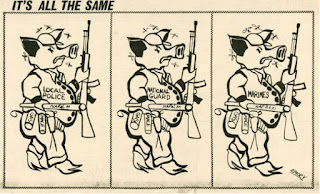 It's always important for a new generations, especially those of today whose own struggles may have been shaped by the Black Lives Matter movement, to be able to see and draw inspiration from the language and imagery of past struggles.
Posted by Russ McP at 10:40 No comments:

Lost Art Available to View and Own for the first time!

An image that has been sitting forgotten in my files for over two decades, waiting for some future time when I could be free to inflict my demented scribblings directly upon the unsuspecting public without having to pass under the disturbed glances of the gatekeepers of the publishing world, is at long last publicly available for YOU the general public to view or own.

I hope my madness fits in neatly with your own.

The Bloody History of the City of Love

The perception of Paris as a city of romance and high fashion may be little more than the result of a sustained and very successful PR campaign. The reality is that, from the Place du Concorde (where the guillotine was raised during the revolution of 1789) to the south-west wall of Pere Lachaise cemetery (against which many of the communards of 1871 were executed by firing squad), the streets of Paris are not just tinged with the rosy red glow of romance, but are also drenched with the blood of countless generations of rebels.
The number of buildings you see dotted around the city that now carry memorial plaques listing every resident arrested and sent to concentration camps during the collaborationist Vichy regime of WW2 is indeed a sobering sight for any visitor to the city.
Most people alive today will recall the recent ISIS-inspired atrocities carried out at the offices of the satirical newspaper Charlie Hebdo and music venues like the one close to the Place du Bastille that shocked the world in 2015.
In 2018 and into 2019 the streets of Paris, especially around the Place de la Republique, as well as many other towns and cities around the country, exploded in popular protest organised by the "gilets jaunes" (yellow vests), essentially fuel protests which saw some extreme instances of police brutality. The streets were drenched in tear gas and some protestors were partially blinded by rubber bullets.
The French are good at preserving their heritage. The Cafe du Croissant, at 146 rue Montmartre in northern Paris, is where the socialist politician and anti-war activist Jean Jaures was assassinated on July 31 1914 by a nationalist. Both the cafe where he was murdered and the newspaper he founded (l'humanite) still exist to this day.
Paris is also the city where one of the leading Moroccan opposition politicians, an anti-colonial activist named Mehdi Ben Barka, was disappeared after speaking to a couple of gendarmes outside Brasserie Lipp (still there) and murdered on 29 October 1965 for his key role in the anti-colonial struggle both in Morocco and the wider Arab world. Details of his murder remain largely classified, and speculation about the involvement of Moroccan, Israeli and US intelligence in his murder is still rife.
Another atrocity of the same period that is rarely discussed in the west, and has only recently been subjected to more rigorous historical analysis, occurred towards the end of the Algerian war of independence. It is an event that will make you look at the waters of the Seine in a whole new light, and may also provide a deeper insight into contemporary Islamophobia in France.

Documentaries about the 17 October 1961 atrocity

This is a recent 51 minute documentary (in French with Arabic subtitles) in which historians, activists and witnesses describe the massacre of Algerian protestors that took place in Paris, France. Conservative estimates suggest at least 200 people were thrown from the Pont Saint-Michel into the Seine. For Algerians it is regarded as a “colonial crime”, which was carried out by French police in order to silence Algerian voices during the final stages of the liberation war. It can be viewed here: https://www.youtube.com/watch?v=HquI833DNCk

One of the first detailed accounts of the atrocity, the distribution of this film was suppressed by the French authorities until 1973, when it was granted a limited “visa d'exploitation”, and it would have to wait until 2011 to receive a full theatrical release. Other films have been made about this dark and bloody phase of modern French history, including:

Le silence du fleuve (The silence of the river) (dir. Mehdi Lallaoui; 1991), and

Jean-Luc Einaudi was a French historian and socialist activist. He remains largely unknown in the English-speaking world (try searching for an English translation of any of his books). Much of his work was devoted to extensively researching the events of 17 October, as well as other crimes and abuses committed by the French authorities in their efforts to put down local support for the Algerian independence struggle. A couple of his books are cited below:

This article is a draft. Let me know in the comments below how much of the history mentioned above you were aware of. Personally, I only became aware of the events of October 1961 from Arab commentators and Arabic (specifically Algerian) media, so I would be very interested to hear other peoples' experiences.

This is part of a series of walking videos I have been making in which I visit significant locations in the musical history of London.

First up, I visited Eel Pie Island in Twickenham.