An Englishman in the East

Born in London, England in 1910, and winning a scholarship to Chigwell School as a child, during his lifetime the British journalist and novelist Alan Winnington would travel the world.
As a young man, following a chance meeting with Harry Pollitt in a pub in 1934, he joined the Communist Party of Great Britain, and he soon became a branch secretary. His career in journalism began when he landed a job with a photo agency, and soon he was writing for socialist newspapers like the Daily Worker (as the Morning Star was known at the time) which he continued to write for from the 1940s up until the 1960s. For the first few years after WW2 he became “our man in Beijing”, when he reported on the early years of the newly independent People’s Republic of China for the Daily Worker, while also working as an advisor to the new Xinhua (New China) news agency.
Uncomfortable Truths
His location in Asia meant he was ideally placed to report on the Korean war when it broke out in June 1950, and he would anger his own government by reporting on both the Korean and later the Vietnam wars from the communist side. Along with his colleague, the Australian journalist Wilfred Burchett (who was equally ostracized for his reporting by his own birth country), Winnington would expose the use of biological weapons against Koreans by the USA.
For this brave reporting both men had their passports removed for many years.

From China to Germany
By 1960 Winnington had learned to speak Chinese fluently, but had already become skeptical of Mao’s approach to building socialism at least two years earlier because of the "Great Leap Forward" and other campaigns, which he described as “stupidities.” He left China with his Sino-British wife Esther and their two children, settling in East Berlin while they attempted to negotiate the return of his British passport with the help of Lance Samson, a German Jew who also worked for the Star.
The British government were still considering a charge of treason or espionage, possibly with a death sentence, as punishment for his reporting during the Korean war, so even after the restoration of his passport he did not return permanently to his country of birth, choosing instead to remain in Berlin. Sadly, his wife wanted to return to Britain, and their marriage broke down when she decided to move with their two children back to Britain, where she married Samson with whom she had a third child. Their daughter Polly would subsequently grow up to become an author in her own right.
After making the decision to remain in the east, Winnington began a new family with a lady named Ursula Wittbrodt, who he had met in 1963 and who would become Ursula Winnington when they married in 1967. He did not receive his British passport until a year later. (Burchett had to wait until Gough Whitlam’s Labour government came to power in 1972 before his birthright was restored.)
Winnington continued to work as a correspondent for the Morning Star from his new home in the GDR, and also served at times as an Asia advisor to the East German government. During the Vietnam War he repeatedly had the opportunity to travel to the Far East where he reported from both China and Vietnam.

From Journalism to Crime Writing
Alongside his journalistic work however, Winnington was increasingly beginning to develop a career as a novelist and author of crime fiction, among them novels in German like Heart failure, Inspector Gullet and The Death Curve, The Presumed Dead Man and Angler's Alibi. He also wrote children's books, such as a fantasy novel in two volumes about a robot horse called "Silver hoof", which was set in the Himalayas. During his time in China, he had developed a considerable love and admiration for the people of Tibet, writing Tibet: Record of a Journey (1957), which these stories reflected.
He even had a very brief foray into acting, appearing in a small film role as a Chief of Intelligence Service in the 1967 East German film Die Gefrorenen Blitze (Frozen Flashes), although he seems to have enjoyed more success with writing. His crime novel Police Alibi was made into a film for East German television in 1971 (Tod in der Kurve), while Milliony Ferfaksa (Fairfax’s Millions) was turned into a feature film in 1980 by the Russian Dovzhenko Film Studios.
His autobiography Breakfast with Mao was first published in a small German print run, as he had still been writing it when he died on 26th November 1983. Described by the historian Edwin Moise in the London Review of Books as “marvellously readable” it only appeared in English in 1986 when Lawrence and Wishart published it as From London to Beijing: Memoirs of a Foreign Correspondent 1914 to 1960.
Nine short novels, six of which belong to the crime and detective genre, the aforementioned two children's books and four travel books about China and Asia have also been published in English at some time or another. Yet despite this diverse oeuvre it appears that Slaves of the Cool Mountains remains the only one of his books currently still in print in the English language, and he currently has no English language Wikipedia entry.
Today Ursula Winnington is mainly known in Germany as an author of cookbooks, where she has been called the “Chef Queen of the East”, with some of her books reaching a total circulation of over one million copies, including her Kleines Kochbuch für Kinder (Small Cookbook for Children) (1977). Since 1992, Klatschmohn Verlag has reissued three of her most popular books, and in 2008 she published another book Liebe, Lust und Leckereien (Love, Lust and Treats). In 1995, long after Winnington’s death in 1983 and the reunification of Germany in 1990, she opened The Gecko in Berlin, a shop for exotic furniture and gifts from all over the world, and continues to make her home in Berlin.

Revival of Interest from Korea
Alan Winnington remains almost unknown in the country of his birth, and the English speaking world more broadly. Unlike Burchett, who is mainly remembered for his Daily Express article of 1945 which exposed the reality of nuclear radiation sickness following the atomic bombing of Hiroshima and Nagasaki, Winnington does not even have an English language Wikipedia entry. He is remembered, it seems, only in Germany.
With this in mind it is therefore quite noteworthy that recently the media organisation Ahim and South Korean journalist Im Hyoin have been bringing Winnington’s revelations about US atrocities in Korea to light once more, if only in South Korea, among them Winnington’s work exposing the notoriously under-reported Sincheon massacre. This atrocity even inspired a painting by Picasso which sits in the Picasso Museum in Paris. It is a painting as stark and brutal as his earlier painting Guernica inspired by fascist atrocities in the Spanish Civil War but which still remains far less well known.

This should give us pause to reflect upon how, thirty years after the Cold War ended, its logic continues to distort our own historical memory.

The Longford River at Feltham 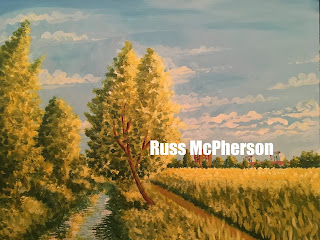 The Longford River flows through south west London. Its path is not entirely natural, having been canalised at various stages and engineered to flow downhill in order to feed the majestic Diana Fountain in Bushy Park. It flows through various landscapes on its journey, including skirting the southern edge of Heathrow Airport and making its way through Feltham and Hampton.

So many local artists use Bushy Park as a source of inspiration for their landscape art that I wanted to focus some attention on the more overlooked landscapes through which the river passes, like this stretch of the river as it flows from Bedfont towards Feltham town centre, hinted at by the buildings on the horizon.

If you like it there are a variety of forms for you to own it available through my Red Bubble page.
Posted by Russ McP at 14:38 No comments: