In many countries around the world May 1st - International Workers' Day - is a national holiday. My own country, alas, is not among them.

May Day has its roots in the rites and traditions of our pagan ancestors who celebrated the spring festival Beltane around this time of year. It became associated with the labour movement in the late nineteenth century, after the execution of labour organisers in Chicago, USA who had been fitted up by local authorities led to a wave of international solidarity, protests etc.


Today many people and unions around the world continue to use the day to remember the achievements of the labour movement over the years, of which the 8 hour day and weekends may be the most notable and frequently overlooked examples. 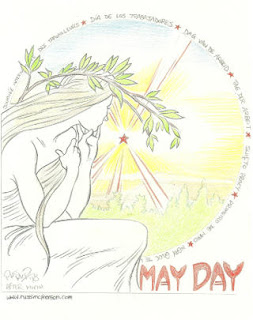