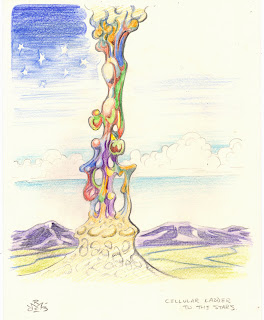 I was going through some old sketchbooks the other day and found this drawing. I think it was a result of taking the pen (or in this case, the pencil) for a walk.
Posted by Russ McP at 02:20 No comments:

The need to build a new civilisation (and other small tasks) 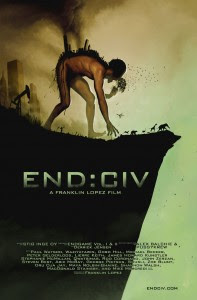 While documentaries like An Inconvenient Truth (2006) and Food Inc. (2008) do a very thorough job of highlighting the threat of man-made climate change to our survival as a species, and the role that industrial food systems play in damaging human health and environment alike, many people who have seen either of these films, and is familiar with issues discussed, will have come away somewhat unimpressed by the solutions put forward by Al Gore and Food Inc. director Robert Kenner, most of which seem to involve encouraging individual consumers to make individual lifestyle choices (such as, to cite one example from the latter pic, choosing to buy organic food from Wal-Mart!), a choice which is only available to those who can afford to make it, which at the present time accounts for an ever shrinking percentage of the world’s population in developing and developed countries alike.

The success of documentaries like these is that they are able to effectively communicate to a mass audience the urgent nature of the environmental catastrophe facing all life on this planet. Where they fail, however, lies in their tendency to marginalise and even ignore completely the need for a much broader, deeper kind of systemic change. Without such root-and-branch change to the rules governing present-day capitalism, the dominant system will likely remain a narrow-minded, growth-fixated beast capable of swallowing the most well-intentioned individual consumer choices whole.

One environmentalist who understands and articulates this failing of the mainstream environmental debate only too well is Derrick Jensen, a teacher and author from northern California who is himself the subject of a new documentary by film-maker Franklin Lopez entitled End-Civ (2011). Financed by a network of grassroots organisations, Lopez’s film (which is available free online) puts forward a compelling, if controversial, argument. However, if the recent KONY2012 video by the campaign group Invisible Children has shown us, it is important to keep our critical faculties intact when viewing such emotive content until we have considered all options.

This being said, End-Civ is well worth watching, for it is in statements of stark and unflinching clarity that Jensen reminds us what is missing from the arguments of many liberal establishment figures like Al Gore and even Greenpeace. Some of the conclusions he draws may seem extreme, even violent (such as advocating blowing up dams, for example), but we are reminded that they are ultimately no less violent than the “biocidal” nature of the system causing the damage.

One of the uncomfortable things about watching a film such as this is that Jensen’s advocacy of militant direct action sometimes seems like he is trying to create environmental martyrs.

Another criticism is that, in the service of this, he sometimes appears to misrepresent some of the historical examples he cites in the film, such as Indian independence hero Bhagat Singh (who was hanged aged just 23) and the alleged “higher rate of survival” of those who participated in the Warsaw Ghetto uprising (most of whom were sent to concentration camps). Those in his own movement who have used militant direct action, such as former Earth Liberation Front activist Daniel McGowan, are currently serving long sentences in maximum security prisons. These examples may be enough to convince disaffected youth, but is unlikely to build bridges between the militant and the more conservative or liberal. McGowan, incidentally, is the subject of another 2011 documentary titled If A Tree Falls, of which I cannot as yet comment.

Taken together, all of these films highlight the fact that the contemporary environmental movement seems to be at the same stage as the labour movement was one hundred years ago. A time when early industrial capitalism still condemned many to lives of misery and squalor, when liberal reformers offered piecemeal gestures of social reform, while the more militant grew frustrated and, often out of despair, resorted to political assassination - the so-called “propaganda of the deed.” It is tempting to draw an analogy between the anarchists, who assassinated industrialists and heads of state, with the ELF’s attacks on lumber companies. These acts were violent, although by holding to a firm moral code which avoided any form of direct action which might result in the deliberate loss of life (human or non-human), groups such as the ELF and ALF occupy a unique place in the history of terrorism.

Within the wider green movement, a sufficiently strong bridge between the liberals and radicals has yet to be built to ensure lasting change. To find a suitable bridge it may help to turn again to the history of the labour movement, and we see that it was not until the working class had representation in the workplace, through trade unions, and in government, through socialist and social democratic parties, that any significant improvement in living standards for the population as a whole became possible.

The difficulty stems from the fact that the environmental crisis goes deeper than the exploitation of the working class, so better representation will only ever patch up the open sores, while leaving the disease to fester. So our immediate problem is not solely to build bridges between liberals and radicals, but to be able to think seriously about how to build and defend a different civilisation, one in which, to use Jensen's words, "there can be more wild salmon in it every year than the year before." This is real wealth.

Taken together films like these should inspire us all to imagine better alternatives, and be prepared to fight for them, however our conscience decides.

How to find good radical literature in south west London 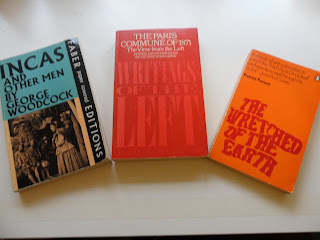 Generally speaking, in terms of mainstream booksellers only the largest of the largest retail chains like Waterstones are able to come close to satisfying the appetites of those like me who like to keep their political consciousness nice and sharp, and are always looking to deepen their knowledge of radical history.

If you value efficiency above all else then ordering online from somewhere like Amazon is probably best, but if you are turned off by the thought of supporting a deeply exploitative, union-busting corporation, there are still alternatives. In fact, Housmans bookshop maintains an online shop which proudly proclaims itself to be “the ethical alternative to Amazon.” Housmans is one of the UK’s oldest non-sectarian radical booksellers, but other more sectarian variants such as the socialist Bookmarks and anarchist Freedom Press also allow you to order both classics and new releases online. Meanwhile, an anarchist publishing enterprise which spans the Atlantic, with branches in Edinburgh and California, is the worker-run publisher and distributor AK Press.

All of these options are ideal if you are after something brand new, which can be delivered straight to your door. A number of them also continue to maintain shops in real, physical space as well. This is very good for those of us who still enjoy the pleasures of rummaging, making accidental discoveries, and even of engaging real people in real conversation. It means we have somewhere to go to satisfy our eccentric habits. The downside is that this may require a considerable outlay in terms of travel expenses.

In the part of south west London where I live the most consistently good source of local, cheap, second-hand literature is to be found in charity shops, and of these Oxfam has the most consistently interesting books on social, political, philosophical and historical themes, not to mention classic literature. Their store on Old London Road in Kingston-Upon-Thames even caters exclusively to books. Over the years this shop has furnished my house and mind with a number of rare books by anarchist writers including George Woodcock and Colin Ward.

One charity bookstore I have been involved with personally is Fara Books in Teddington, which maintains an impeccably well organized stock, but is largely geared towards children’s books, something which seems quite fitting for a charity set up to aid disadvantaged children in Romania.

The classic old antiquarian bookstore, like the kind my great-grandmother once ran in Glasgow, independent of the charities sector, is rapidly becoming something of a dying breed. For this reason, if you find one it is definitely worth supporting them with every ounce of spare change in your pocket, in order to preserve what is now a unique retail experience. This is especially worthwhile if the shop in question contains stock which is as diverse and fascinating as that which can be found in Anthony C Hall’s on Staines Road, Twickenham.

Hall’s is quite frankly the kind of beautiful old bookstore where you can easily lose yourself between shelves crammed floor to ceiling with what I can only describe as an endlessly fascinating array of old books. Nowhere else in the borough have I found such a wide selection of Tolstoy’s shorter, lesser known writings, mixed in with books about the Italian Marxist Gramsci and the Paris Commune of 1871.

To be able to buy a book about the history of revolutionary socialism in France or insurrectionary anarchism in Italy, then retire to read it over a pint of bitter in one of the pubs nearby... This alone would be worth a trip to Twickenham. To be able to do so in a street mercifully devoid of the ravages of Starbucks only serves to make the experience that much sweeter.
Posted by Russ McP at 14:54 No comments: