A Visit To Highgate Cemetary 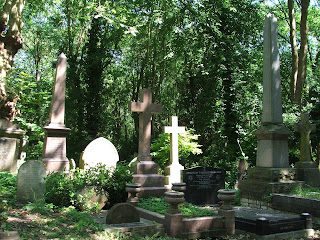 In brilliant summer sunshine we walked south from Highgate station, along streets flanked by grand old Victorian mansions, most of which are now broken up into flats. True to its name, Highgate lies on high ground, and every now and then we would catch a glimpse between buildings of one of the most beautiful, panoramic views of London to be had without having to walk all the way up Parliament Hill. Every time a road turned or a new side street joined the solid rivers of tarmac which flow across the low hills of this north London suburb we would gasp and stop, before pressing onwards towards our somewhat macabre destination: Highgate Cemetery.

Unusually for a cemetery Highgate’s east section carried a charge of three pounds a head. In order to get our monies’ worth we therefore chose to spend a full day exploring the tomb clustered wilderness which provides the final resting place of so many of our heroes. 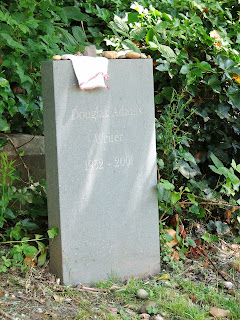 Principle among them being Douglas Adams and Karl Marx, and what an interesting comparison they make! Adams’ gravestone is so modest and simple compared with Marx’s looming bust, as imposing in its way as the vast Soviet bureaucracies created in his name. 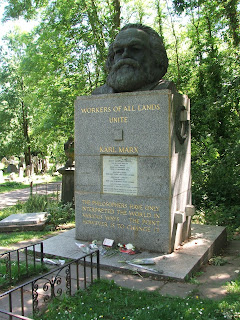 The amount of people buried here who have fought in their own ways for peace and social justice is quite remarkable. How much this has to do with the presence of Marx himself is an interesting question. It must be said that quite a number of notable left wing activists have secured plots which directly face his resplendent bust with its resounding proclamation to the “workers of all lands to unite”. One of them is Paul Foot, a keen agitator for social justice, orator, and contributor to Private Eye and Socialist Worker. His modest gravestone states in terms almost as simple as Adams’ that he was a “writer and revolutionary”. There is also a quote which I recognised as being by the Romantic poet Shelley, but couldn’t recall the poem in which it occurs. It is the final lines from ‘The Mask of Anarchy’: 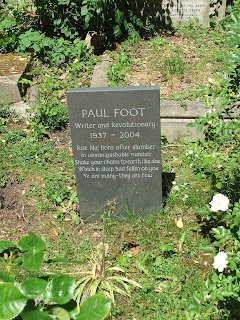 It is a testament to the enduring appeal of Karl Marx and his philosophy of social equality and revolutionary change that he appears to be the most popular of all the east wing’s inhabitants. A number of factors prove this to be true. There is the fact that a sign advertising the presence of his mortal remains, complete with a small picture of the tomb, is pinned to the main gate. There is also the fact that nearly every foreign tourist who stopped us that day did so to ask where to find the final resting place of the Father of modern Socialism – Marx. 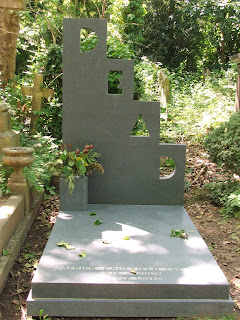 But Highgate cemetery bursts with notable individuals. The Pop artist Patrick Caulfield’s stylish gravestone states with stark finality: “DEAD”. I was delighted to discover the grave of the actor Sir Ralph Richardson, who performed many great roles, but who I know for his endearing portrayal of the Supreme Being in the classic Terry Gilliam movie Time Bandits. My girlfriend, being a native Australian, was equally delighted when we discovered that the Australian-born artist Sidney Nolan was included on the list of notable inhabitants in the map we picked up at the main entrance. We spent a good hour or more searching for Nolan, sadly to no avail. 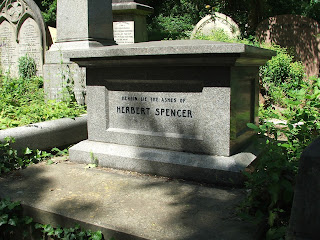 It is perhaps a small irony of history that one of the tombs overlooking the bust of Marx should belong to a political philosopher whose defence of individualism and laissez faire capitalism stand in diametric opposition to the state-controlled bureaucracies and centralized monopolies Marx’s own ideas inspired. Herbert Spencer’s works include Social Statics and The Man Versus The State, and he was one of the foremost proponents of social Darwinism. It was Spencer who attempted to turn Darwin’s theory of natural selection into a scientific vindication of industrial capitalism. And perhaps most significantly, it is Herbert Spencer, not Charles Darwin, who is responsible for coining the phrase ‘survival of the fittest’.

I feel it important to record our pleasure at finding Marx and Spencer in such close proximity.

Amended February 2016.
The photographs appear courtesy of my wife Jane McPherson.
Posted by Russ McP at 10:20 No comments: