When I first became aware of Italian comics and graphic novels (known as “fumetto”, for “picture-stories”, in Italian), I found that most of what has been translated for English-speaking audiences are books by the greats of Italian erotica: Guido Crepax’s adaptations of erotic classics like The Story of O and Justine, Milo Manara’s amusing and often thoughtful flights of fantasy and Paulo Serpieri’s buxom heroine Druuna. Hmm, I wonder what that says about the interests of English speakers?
When you start looking, you find that Italy has produced quite a number of notable comics in both the adventure and humour/satire genres, although sadly not many of them translated into English. For example, in 1968 the writer and artist Franco Bonvicini (better known as Bonvi) created the popular anti-war comic book Sturmtruppen, which is set in WW2 but (like Robert Altman’s M*A*S*H) never had to refer directly to the conflict by name because it is obvious to the reader from the numerous German/Nazi caricatures. 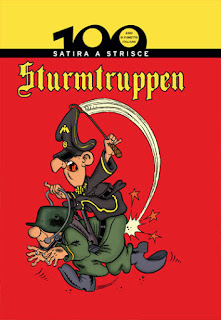 There is also Benito Jacovitti’s hot-tempered, chamomile tea sipping gunslinger Cocco Bill, whose adventures in the Far West are accompanied by his cigarette-smoking, tequila-drinking horse Trottalemme (literally, “trot slowly”). Jacovitti’s style was reminiscent of Asterix co-creator Uderzo, or maybe the English underground cartoonist Hunt Emerson, although he pre-dated these artists by some years. 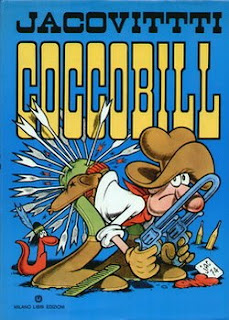 Then there is the satirical spy comic Alan Ford, first created by Luciano Secchi (writing as Max Bunker) and Roberto Raviola (drawing as Magnus) in 1969, which was laced with surrealistic black humour and sardonic references to contemporary Italian and wider western society. The book tells the story of a collection of spies called “il gruppo TNT” (literally, “the TNT group”) who operate undercover out of a flower shop in New York, and are perpetually broke. The characters are all incredibly smart but also incredibly lazy, and their struggle against people like the criminal Superciuk (“superhick”), who robs from the poor to give to the rich, I understand sometimes results in them defeating him purely by accident.
The books became very popular in Italy, but although editions appeared in French, Danish and Portuguese (primarily for Brazil), it never really caught on in the same way in those countries. It also never appears to have been published in English, despite the fact that Magnus modelled the main characters' appearance on the English actor Peter O'Toole. 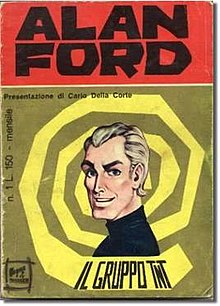 We can only wonder if the way the books were translated had something to do with it, as the only country outside Italy where Alan Ford caught on in a big way was across the Adriatic in neighbouring Yugoslavia, which at that time stood between the capitalist west and communist east with its unique commitment to market socialism and the Non-Aligned Movement it helped create.
When Alan Ford was picked up by the Yugoslavian daily newspaper Vjesnik (“Bulletin”) in 1972, its success appears to have been partly down to its translator Nenad Brixy, who inserted lots of uniquely Croatian references into the strip. The comics’ Italian writer certainly credited Brixy’s work as playing a large part in the books success in the Balkans, and it is clearly a testament to their combined skill that the Ford books remain a cult icon in a number of Yugoslavia’s successor states, primarily Croatia, Serbia and Bosnia & Herzegovina.
The latter even hosted an exhibition “Alan Ford in BiH: yesterday and today” in 2014 as part of its Month of Italian Culture. For its curator Professor Daniele Onori of the Italian Embassy “in the characters and their behaviour, Yugoslav readers found something which spoke directly to them.” Perhaps it was because unlike Batman or James Bond the characters all lived in poverty on the floor of their flower shop, or because Yugoslavs saw in the leader of the TNT group, a man named Number 1, an unintentional caricature of Tito...who knows?
Although Alan Ford and the TNT group have proved most popular in the Serbo-Croatian speaking parts of the Balkans, the villain Superciuk is notable for having inspired the name of a Macedonian punk rock band, and despite the paper Vjesnik having come to an end a few years ago Alan Ford continues to appear in print thanks to the Croatian publisher Agarthi Comics.

On a side note, the paper Vjesnik actually had quite an interesting history. In the west the so-called “underground” press merely referred to newspapers and comics that were published and distributed quite openly, but generally marginalised to outlets like head shops frequented by mainly young people with left-liberal political leanings. They were sometimes targeted for obscenity, like Oz magazine in the UK was in 1971, but were generally allowed to publish unhindered.
Vjesnik however was started during WW2, when Croatia was under literal Nazi occupation/annexation, as a paper of the leftist Yugoslav Partisans (the anti-fascist resistance), only becoming a national newspaper-of-record after the Nazi defeat in 1945. Within this context, printing and distribution must have been quite a challenge.
It seems a shame to me that after the break-up of Yugoslavia the paper came under the control of the Croatian Democratic Union, which was at the time the country’s ruling conservative party, who even changed its name for a while to Novi Vjesnik (literally “New Bulletin”, which to an English speaker reminds me of the same kind of right-wing revisionism that led to New Labour). These moves only led to a terminal decline in readership and the papers eventual closure in 2012.
Fortunately, like most good comic strips, Alan Ford’s cult appeal seems to go far beyond his original platforms.

In case anyone was wondering where I get my inspiration from, here's a short GoPro video from 2017 of a bike ride I made across Hounslow Heath, close to where we live in south west London. You can see one of the results in the new 'Paintings' section of my website.
Posted by Russ McP at 03:00 No comments: