The creation of art that attempts to convey the sterile horror of war has a long history indeed.

Vasily Vereshchagin (1842-1904) was a Russian landscape painter of the nineteenth century and, for a time, an official war artist for the Russian army. His paintings often reflect his own direct experiences.
He is often categorised as an anti-war artist because of the devastated landscapes he painted drew closely upon his own direct experiences, and were depicted in his distinctive crisp, unflinching classical realism. These paintings are like a "morning after" image, displaying the sterile destruction of life and civilisation that remains once the heat of battle has died down. 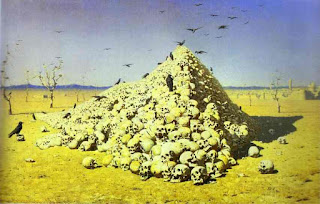 Vereshchagin dedicated 'The Apotheosis of War,' to "all great conquerors, past, present, and to come." It can be found today in the Tretyakov Gallery in Moscow, which houses a great deal of his works. 'The Ruins of the Theatre in Chuguchak' (below) can be found in the Russian Museum in St Petersburg.
What makes paintings like these so powerful and disturbing to me is how often images like these have been repeated and recreated in the real world in the century and a half that has elapsed since their creation. 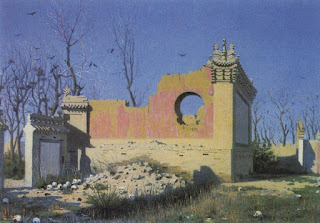 The lifelessness of Vereshchagin's landscapes are echoed by those of the British war artist of WW1 John Nash. The hideous mound of skulls in 'The Apotheosis of War' has been seen in the twentieth century too many times to count, perhaps most infamously and presciently in Cambodia of the 1970s.
In the last century we have seen the power of photography replace painting to convey the reality of war to the public. Think of those photographs of the Japanese cities of Hiroshima and Nagasaki, which the Australian journalist Wilfred Burchett, who defied a ban on western reporters visiting the cities following the US atomic bombing, described as "a warning from history".
In the twenty-first century independent journalists like the British photojournalist Guy Smallman have produced similarly stark images on landscapes in Afghanistan.
Others increasingly rely more on video, which can be easily distributed via social media to anyone with an Internet connection. For example, this footage shot by the British independent journalist Vanessa Beeley of Daraa al Balad in Syria I feel captures the same spirit of Vereshchagin's unblinking vision, which bears witness to our own inhumanity.


Today some of the best anti-war reportage is that which is created by the perpetrators themselves, and it is merely left to conscientious individuals to alert the general public to its existence, as US Army Private Manning did back in 2010.
Posted by Russ McP at 07:16 No comments:

Since the Spanish-speaking world covers everything from Spain itself to the whole of South and Central America that isn't Brazil or French Guyana, I am going to focus on the comics of one country for starters: Mexico.

When looking for the roots of Mexican satirical cartoons one place to begin may someone like the nineteenth century political lithographer Jose Guadalupe Posada (1852-1913). Posada's influence was of course not just confined to cartoonists but also extended to the wider culture, perhaps most notably to the muralists that emerged after the Mexican Revolution of 1910. 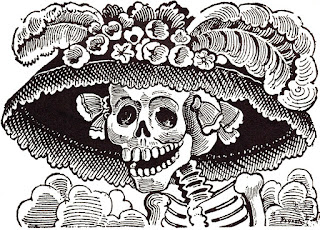 One of Posada's iconic characters

A later artist to draw upon the political radicalism of Posada and the muralists was the cartoonist Eduardo del Rio (better known by his pen name Rius) (1934-2017). "Rius" created satirical comic strips in the 1960s like 'Los Agachados' as well as many books that reflected his left-wing sympathies and critique of the Catholic church, of which he was a member for many years. His 1981 book El manual del perfecto ateo (The Handbook for the Perfect Atheist) even got him excommunicated, while his history of the Catholic Church probably didn't help things either. Its called Pope Puree (which I understand is a kind of play on words of the Spanish term for "mashed potatoes").
Rius also carries the curious distinction of being the first author outside of the Soviet bloc to be published by Izvestia. 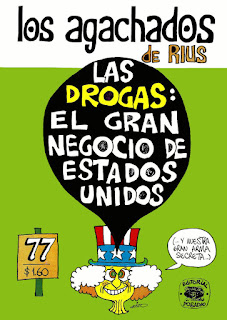 One of his most widely read books is Marx para principiantes (Marx for Beginners) which helped launch the whole "for beginners" genre.
Rius remained active for most of his life, helping launch the magazine El Chamuco in 1996 with other creators like El Fisgon, although sadly this version of the magazine folded in 2000 before its eventual re-launch in 2007.
Posted by Russ McP at 02:32 No comments:

I have always been aware of the respect that the French hold for the arts. More to the point, since learning, in the mid-1990s, that the two most famous names of 1960s U.S. underground comix - Robert Crumb and Gilbert Shelton - had both chosen independently to emigrate to France, I have also been conscious that this high regard also extends to that form of graphic storytelling and social commentary so frequently dismissed in the English speaking world as "comics" or "cartoons" (I imagine this is because no one has yet coined a more succinct term, meaning the endless confusion with fields like animation and stand-up comedy persist).
Growing up in the UK I found that only a thin slice of French talent was ever translated and published in English. I had heard of the work of the science fiction illustrator Moebius (pen name of the late Jean Girard), for instance, or the humorous slice-of-life cartoons of Claire Bretecher, and of course books like Asterix and Iznogoud figured prominently in my reading habits from a young age (certainly as much as MAD magazine), but that was about it.
As i grew up and found myself wanting to seek out newer or more different work I soon found that unless you read Heavy Metal magazine avidly (this being the US version of France's sci-fi/fantasy magazine Metal Hurlant, nothing to do with the music genre), there were very few opportunities to find work by French artists short of actually learning some French and going there.
One of the interesting things you find when you do go there is how mainstream the French love of comics and satirical magazines is. It extends well beyond the walls of comic shops, as here you will find that they grace the shelves of most newsagents in the country. It reminds me of that brief renaissance in the late 80s-early 90s when British newsagents's shelves were filled with VIZ imitators. 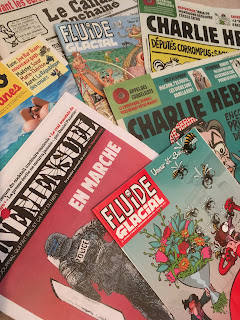 The reality for UK mass market comics aimed at a more mature audience has consisted for many years now primarily of VIZ and Private Eye (both of which are really humorous or satirical magazines that also happen to publish a lot of comic strips or gag cartoons). This figure at least doubles as soon as you cross the Channel. For every VIZ you have a Fluide Glacial and (periodically) l'Echo des Savanes. For every Private Eye you have papers printed on equally cheap looking newsprint with names like Le Canard enchaine, Sine Mensuel or Charlie Hebdo.
It also impressed me that within just one French comic magazine you find a much wider diversity of drawing styles than I am used to seeing in either VIZ or more kid friendly fare from DC/Thompson. (This is one area in which the long-running science fiction mag 2000ad bucks the trend at least.)
Perhaps it is just because I grew up with MAD and US underground comics more than Marvel and DC that I feel more invigorated by publishers that do not cultivate a "house style"?
In just one edition of Fluide Glacial, for instance, I have seen artists as diverse as those with the loose cartoon-style of Fabrice Erre or Edika, to those with the detailed realism of Dominique Bertail.
And that's just on the news-stands. There is of course an equally dedicated array of specialist comic shops catering for people that enjoy longer, graphic novels. Rue Dante, in the area known as the Latin Quarter (on the south side of the River Seine), has long maintained a collection of different comics and speciality stores. Over the years, we have even seen this unique market developed and catered to by a science fiction-themes creperie.
Almost makes me wish I could speak French more fluently!