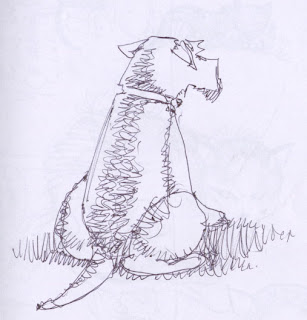 In an effort to attract more mainstream interest to the blog, I'm posting a few drawings from my sketchbook featuring loose but - I hope - frankly adorable observational (apart from the one with the rabbit) drawings scanned from my sketchbook. (To prove how good my scanner is, look for the ghost of images showing through from the reverse of some of the pages!)
In case some of you are wondering if being in love has made me go soft, most of these were drawn in the months prior to meeting Jane, proving that I've always been a soft bastard! 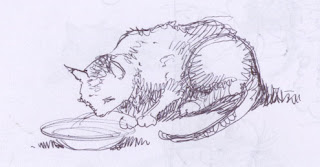 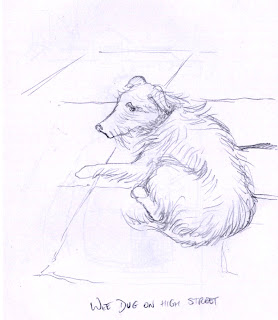 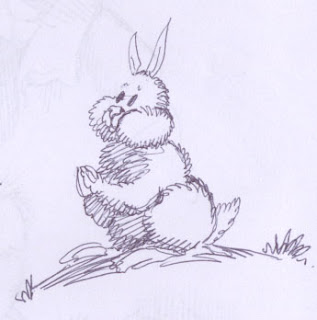 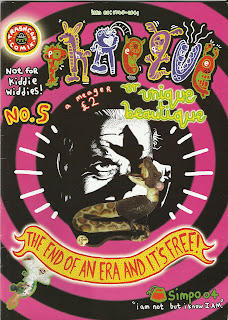 As some of you may know, about seven years ago I was a contributor to the Glasgow-based underground comic Freak. You are probably also aware that my partner and I are regular visitors to Brighton, down on the south coast of England. I haven't been in touch with Freak's creator, the indefatigable Doctor Simpo, since about 2004, nor seen his work around. Imagine my surprise, therefore, when my partner and I wandered into a joke shop on Bond Street, Brighton, only to find a pile of copies of Doctor Simpo's Things and Stuff solo comic just inside the door. I was delighted that he was still working and finding people to stock his comic. I thought that he must have a good relationship with these people, too, as they have a few original Doctor Simpo drawings on the wall too... and some more of his comics... and some more original art hanging on the walls. What was this place?
It was at this point that a guy in a fez wandered over and introduced himself as "The Doctor." It was the first time I had met Doctor Simpo in person, having only corresponded by letter, email and telephone, during the old freak days, and he took the opportunity to show us around his latest project - Frighton or Bust. He even gave me a copy of the final Freak (issue 5, see above), which contains a two pager of mine, but which I never received for one reason or another at the time.
Frighton or Bust is in town for an initial run of two months, as a fully functioning gallery/comic shop/joke shop/magic shop, so that means that you have until the end of January 2012 to get down there and check it out. It's well worth a visit if you're in town.
Posted by Russ McP at 00:53 No comments: