Michael Faraday was the self-taught chemist and physicist who, among numerous other achievements, was responsible for the discovery of electricity. In 1833 he was made Fullerian Professor of Chemistry, an appointment for life at the Royal Institution, and worked as a government researcher investigating, among other things, the causes of a disastrous colliery explosion. 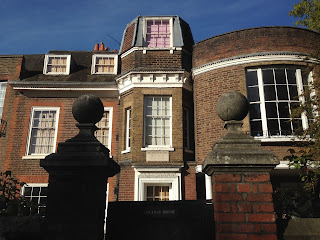 Faraday came from a working class family, and became a devout follower of the Sandemanian branch of the Church of Scotland. He was offered a knighthood in recognition of his services to science, but declined it, as it was against the Bible to accumulate riches and pursue worldly rewards like titles. Faraday preferred to remain "plain Mr Faraday to the end." He also refused on ethical grounds to help develop chemical weapons for use in the Crimean war.

Faraday House, at 37 Hampton Court Road, Middlesex, was formerly the Master Mason's House. The building was awarded to Faraday as a grace and favour dwelling in 1848, after the Prince Consort is said to have made representations on his behalf. He spent his last years here, and true to spirit, turned down an offer of burial in Westminster Abbey, opting instead to be interred in the dissenters' section of Highgate Cemetery.

You can see a pencil study I did from a bust of Faraday, which sits in the British Library, on my Instagram.
Posted by Russ McP at 06:05 No comments:

"There are thousands of memorials in every town and village to the dead, but not one as a reminder of the danger of future wars." - Sylvia Pankhurst, 1936

Between the years 1924 and 1933 Sylvia Pankhurst lived with her Italian-born partner Silvio Corio at 126 High Road, Woodford Wells, Essex (what is now Woodford Green High Road, part of the north east London suburb of Woodford), opposite the Horse and Well pub, which still stands to this day.
In her lifetime Pankhurst was active in struggles for women's liberation, peace, socialism and, in her later years, the independence of Ethiopia from both Italian and British control. Corio was a journalist and painter who also worked at various times as a waiter and street trader, and for many years was active in the anarchist movement, first in Italy, then briefly France, before finally settling in London. In the early years of the twentieth century, before World War 1, he was part of the collective responsible for setting up a short-lived libertarian school near Euston.
The house Corio and Pankhurst moved into in 1924 was originally called Vine Cottage, but after settling in they re-named the four-room building Red Cottage, running a teashop for visitors making their way to nearby Epping Forest. Pankhurst herself had been a longtime visitor to Epping Forest. During WW1 she was fond of taking long walks with her ailing comrade Keir Hardie, the founding member and first leader of the Labour Party.
Once settled at Red Cottage she began publishing the New Times and Ethiopia News, her contribution to the former British colonies' struggle for independence from another coloniser: fascist Italy. 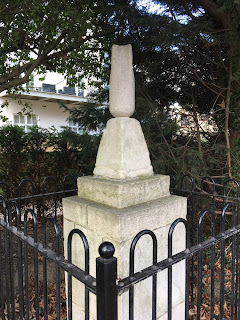 In 1935, in what was then the building's front garden, a monument was unveiled by R Zaphiro, Secretary of the Imperial Ethiopian Legation London, of a stone bomb on a four-sided plinth. Across the four sides was inscribed a dedication: “To those who in 1932 upheld the right to use bombing aeroplanes this monument is raised as a protest against war in the air.”
The protest monument was designed and carved by the sculptor Eric Benfield, who has explained he was personally motivated by a strong feeling that: “Those [members of the league of nations] who had preserved bombing were politically and morally dead, and this was their gravestone.”
Visitors to the site may find it somewhat obscured by surrounding foliage. 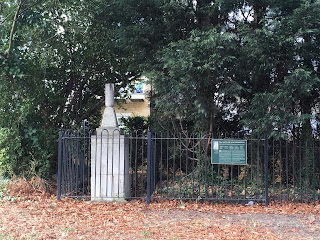 During the 1930s the monument was subject to vandalism, at least one time by fascist Blackshirts. Sylvia, Silvio and their young son Richard, who was born during their time at Red Cottage, subsequently moved down the hill into a larger Victorian building called West Dene, which stood at 3 Charteris Road, next to Woodford station. West Dene has since been demolished to make way for flats, although in 1995 Redbridge council created a small park in the same vicinity which was named Pankhurst Green. 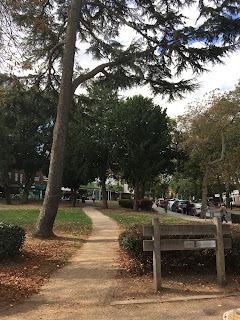 The building that housed Red Cottage was itself demolished in 1939 to make way for new houses. However, Benfield's unique protest monument of the stone bomb has remained, and was even awarded Grade II-listed status, mainly through the efforts of local activists who, during the 1980s, made the area a venue for peace picnics. So it is thanks to their efforts that the quote I used at the beginning of this article is not strictly true. There is still at least one monument that warns of the danger of future wars.
A moderately steep hill connects the Pankhurst Green in Woodford town centre with the busy road at the top where you will find the stone bomb memorial, but it is certainly worth the visit to bear witness to such a unique monument.
Posted by Russ McP at 09:07 No comments: