I have been discovering the popular music of Kazakhstan

I have found that, thanks to the interweb, I have been able to expand my musical horizons far beyond what I used to hear on John Peel or Andy Kershaw's radio shows, as I hope this post will demonstrate.

Kazakhstan is a not-insignificant-sized country which shares a very long border with Russia, and a somewhat shorter border with China, but which is generally associated by people in the west of a certain age (my own) with a deeply cringeworthy film and television character created by a British comedian and filmed on location, not in Kazakhstan at all, where his character is supposed to come from, but from a very poor part of the eastern European country of Romania.

You can imagine what a pleasant surprise it was therefore to discover that, not only was the real country of Kazakhstan not only home to the Soviet space program, and has facilities which still contribute to the international space program to this day, but that it is also a country that has had its own quite interesting homegrown music scene, often influenced by western pop styles, but also distinctly Kazakh.

The gateway group for me has been the progressive beat combo Dos-Mukasan.

Dos-Mukasan were a vocal and instrumental group created in 1967 by students of the Kazakh Polytechnic Institute in Alma-Ata (the former capital of Kazakhstan, in the south of the country, which is now called Almaty).

They performed their own original works of psychedelic-tinged pop-rock in both the Kazakh and Russian languages. In an approach that was not unlike the artists of the Chilean “new song” movement, they also performed their own modern arrangements of classic Kazakh folk songs.

The first major performance of the group was in 1971, when they appeared at the All-Union Festival of Friendship of Peoples, in Tashkent, Uzbekistan. They recorded several albums, in 1971, 1973, an eponymous album in 1976, 1980 and 1983, and won several awards at festivals from Minsk to Berlin.

Dos Mukasan performing an uptempo track on TV in 1972

I understand that founding member Dosym Suleev even went on to become the rector of his former college KazNTU.

Dos Mukasan appear to be such a significant part of Kazakh popular music that a bronze sculpture depicting the founding members of the group was even erected in 2008 on land owned by Pavlodar State University, Pavlodar, in north-eastern Kazakhstan.

They are far from alone, and there are many other musicians and performers from Kazakhstan, many of whom are still performing today. Notable examples include the Boomerang Jazz Ensemble (formed in 1973 in the town of Alma-Ata), electro group Medeo (known for their 1984 LP Ochotnik), and the singer Murat Ahmadiev (who sang in native dialect Uyghur).

Soul singer Roza Rymbaeva, who comes from a working class part of eastern Kazakhstan, is a graduate of the theatrical-artistic institute in Almaty, and began performing with groups like the Boomerang Jazz Ensemble and the pop band Gulder ("Flowers"), later on joining the pop band Arai, which her husband managed. She won the Gala-83 grand prize in Cuba, among many other song contests in eastern Europe. Sadly, because of the cold war, the distribution of her records was restricted to countries of the Soviet bloc during the 1970s and 80s, and it has only been since 2003 that record companies in the newly independent Kazakhstan have made her work available on CD.

Roza Rymbaeva on television in 1977, performing
her tribute to Kazakh national hero Aliya Moldagulova,
who died in defence of her motherland in 1944

In the period of independence there have been the younger pop groups to emerge like A'Studio, founded by Kazakh and Russian musicians in 1987 (as the USSR began to crumble), and more recently even a “boy band” called Ninety One.
Posted by Russ McP at 07:52 No comments:

Here's a flashback to a video I uploaded to my YouTube channel about a year ago, when I was getting to grips with different kinds of software. The footage was shot from a moving tram as it passed through the suburbs of Melbourne using an old iPhone. I then ran the thing through iMovie, adding titles and credits, and added a musical score I had created myself using the GarageBand app, which we had installed on one of Jane's devices and felt like the right tempo. Its short and sweet gritty. Enjoy!

An unofficial gallery of street art can be found in a derelict train yard. The site itself has been re-colonized by wilderness over the years, and recently has found itself slowly being transformed into an official Nature Reserve between Pevensey Road, Hanworth and South West Middlesex Crematorium.

Here are a few examples of the works on display by local artists. As is traditional, new works are painted over old. Presently you will find a nice mix of figurative and typographic. I'm afraid I do not know any of the artists whose work is presently on display, as I only became aware of the unofficial outdoor gallery when first attempting to walk the full Crane Valley, and I would caution anyone seeking to view the art in person to be careful as there is a lot of broken glass on the ground. Presumably some kind of interactive conceptual piece using found objects... 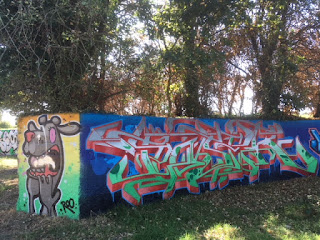 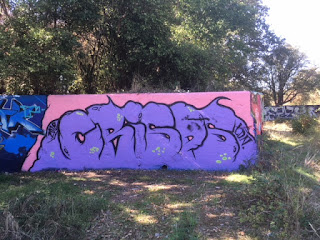 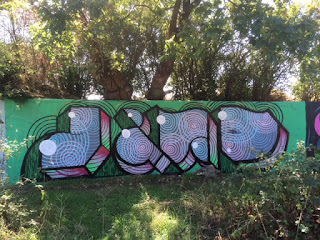 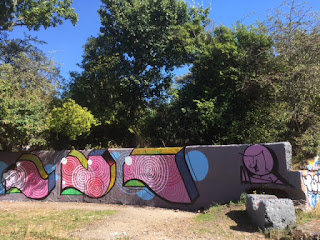 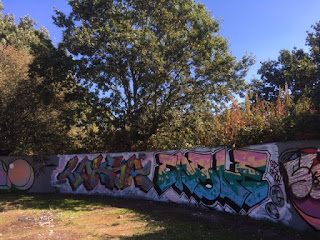 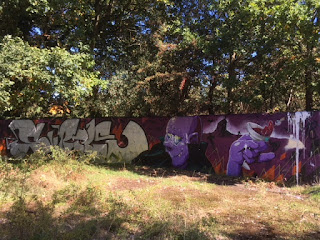