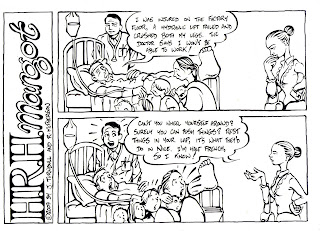 H.R.H Margot is a brand new strip created in collaboration with my amazingly talented (and beautiful) other half. The strip is about a Human Resources troll with all the sensitivity of a slug, and it goes without saying that any similarity to persons living or dead is purely coincidental!
Posted by Russ McP at 03:05 No comments:

From My Experimental File 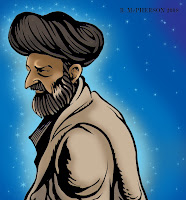 How To Draw Cartoons the Russ Mcpherson Way

First, write or sketch any ideas as you have them and put them away in a box or a drawer. Ideas are like buses, or romantic opportunities. If you miss one, chances are you'll end up sitting around for ages waiting for another that never comes.

Every now and then peer into the box or drawer and see if anything catches your eye.

If one of the ideas you've accumulated does spark something off, work out the details, how many pages it will run to. Then you can start to lay the thing out in pencil. Don't waste too much time on pencils unless you want somebody else to ink them for you, in which case the more detail the better.

The flowing nature of my drawing stems at least partly from the fact that I only use pencils to provide a rough guideline to follow when it comes to the fun part of bringing inky definition to a drawing.

Incidentally, I use pure black india ink with a regular drawing pen.

After the inks have completely dried you can erase any outstanding pencil lines. And you're done!

Here endeth the lesson.
Posted by Russ McP at 14:32 No comments: 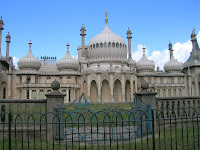 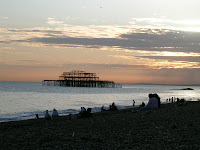 I haven't blogged in a little while, but I have to say that I was thrilled to receive a copy of Wasted #2 in the mail in June. Its available now from selected stores throughout the land, or on the web from www.wastedcomic.com. It can be found in Forbidden Planet, where it seems to be stocked in the vicinity of the sci fi anthology 2000ad, presumably because of Wasted editor Alan Grant's associations with both mags.

Issue two is in full colour, and features some fantastically funny strips filled with plenty of bawdy humour, such as Alan Kerr's Lusi Sulfura, Curt Sibling's Total Fear, Jamie Grant's Spaced Cabby, and the top notch Tales of the Buddha (written by editor Alan and drawn by Classical Comics illustrator Jon Haward). There's a load of other stuff too, including a couple of short strips featuring my own character Amber Nectar, who even gets a brief mention in this review:

So, if you're over 18, rush out now and get your dose of bawdy adult humour! You won't regret it!
Posted by Russ McP at 13:44 No comments: 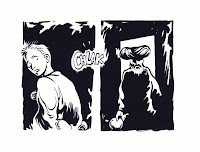 A couple of panels from The Battle Within, a work in progress.
Posted by Russ McP at 08:52 No comments:

Ramble: The Battle Within 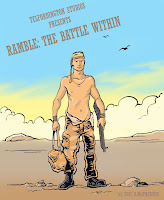 The Battle Within is the first part of a projected trilogy I have been developing with my friend Richard Harris. I am planning to share more samples with you as the series takes shape.

Its an unconventional war comic, placing its emphasis not so much on a physical conflict as a more inward, psychological, and even mystical one. It centers around a soldier, his struggles with a profoundly intense form of post-traumatic stress, and the unique way in which he overcomes his problems in order to find true love, acheive self respect, honour and justice and all that good stuff that deep down everybody wants.
Posted by Russ McP at 14:13 No comments:

I was saddened to read of the death of the writer J.G. Ballard, one of the most visionary authors of the 20th and early 21st century.
For those not familiar with his work, Ballard began his career writing science fiction short stories for anthologies like New Worlds. However, to call him a science fiction author would be misleading. He usually described himself as a writer of "speculative fiction", or as an author of books which pictured "the psychology of the future".
What so inflamed my imagination reading him in my teens and early twenties is that, unlike the galactic adventures of many conventional sci-fi authors, Ballard's stories are often concerned with inner space and the often surrealistic experiences of characters with often very uniquely disturbed psyches.
In works like The Atrocity Exhibition Ballard drew even further away from conventional science fiction themes into the literary avant garde.
A number of his novels were adapted into very successful and often controversial Hollywood films. Empire of the Sun, a semi-autobiographical account of his experiences as a child in Shanghai during World War 2, was filmed by Steven Spielberg, and his novel Crash, about the lives of characters who all share the same bizarre automotive fetish, was made into a controversial 1996 movie by David Cronenberg.
If you haven't read Ballard his short stories are definately the place to begin, partly for the simple, lucid and often beautiful descriptive quality he brought to the most intensely subjective material, and partly for their genuinely mind expanding quality.
Better than drugs.

No pictures to share with you just yet, so instead I'm posting a link to this fascinating talk given by Scott McCloud, author of Understanding Comics. 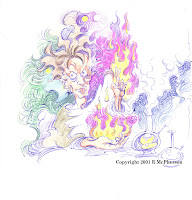 Here's an automatic drawing from my sketchbook archive. I think this style of drawing is sometimes known as "taking the pen for a walk", because you're not making any conscious decisions about what you're trying to say with a given piece. You kinda give your unconscious free reign. For this reason it was quite a popular past-time with the Surrealists back in the 1920s, as well as the English artist and magician Austin Osman Spare, who likened it to a kind of trance.
Posted by Russ McP at 07:15 No comments:

A new approach I've been playing with. Note the position of the signature, which probably signifies something or other...
Posted by Russ McP at 09:34 No comments:

I created Amber as a one off when Ben "Doctor Simpo" Simpson asked me for some pages for the fourth issue of his surrealistically satirical underground comic Freak. Turns out she was far more appealing than the degenerate stoner characters I'd been drawing up till then, and so his associates at Glasgow's Hope Street Studios asked me to revive the character for their dope humour mag Northern Lightz.
She's been revived more recently for Lightz' successor title Wasted. I went along to the launch signing in London in autumn of 2008, which was a tremendous buzz because most of the people involved, folks like editor Alan Grant, cover artist Frank Quitely, Jamie Grant and Jon Haward, are far more established in the field than me.
You can find out more at www.wastedcomic.com
Posted by Russ McP at 03:47 No comments:

"World's End" was a comic strip I created for a Leeds-based independent magazine called The End is Nigh, published by writer/journalist Michael Molcher. As you can probably guess from the title, the whole mag has an apocalyptic theme. It also has interviews with the likes of Alan Moore and Melinda Gebbie, and quite a few high profile contributors as well, including Boo Cook, Leah Moore and John Reppion, and many, many more besides. You can still buy copies from http://www.endisnigh.co.uk/
Posted by Russ McP at 08:23 No comments: