Reflections on the recent eviction of Runnymede Eco Village 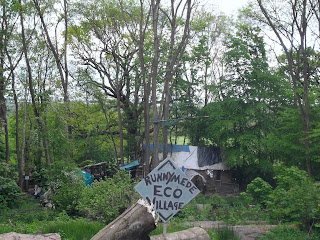 Runnymede Eco Village, which evolved peacefully on a few acres of steep, muddy, dilapidated woodland for more than three years, achieving an initially positive legal ruling in the High Court in June 2015, before losing a subsequent appeal in early September, was finally evicted, seemingly without notice and with a quite shocking but regrettably common degree of force, on the morning of Wednesday 16th September 2015.
The alternative community had its roots in a land rights campaign called Diggers2012 which sought to highlight the deeply unequal nature of land ownership in the UK. They did this by reviving the spirit and tactics of the historical Diggers of 1649, also known as the True Levellers, a millenarian group created primarily by a former cloth merchant named Gerrard Winstanley. Along with a small group of like-minded people, Winstanley had sought to “make the earth a common treasury for all” by occupying wasteland at St George's Hill in Surrey, building rudimentary structures and sowing vegetables, and inviting all to come and join them. We know about their ideas because, living as he was in the early days of the free press, Winstanley was also a very active pamphleteer.
As is so often the case, the eviction of Runnymede Eco Village demonstrated the disregard that some bailiffs seem to show towards persons and personal possessions. No attempt was made to spare even the beautiful 16th century-style longhouse that had served as the main communal area for the community for example. Part of me always felt that, even if the residents were one day evicted, the longhouse could still have provided an interesting curiousity, either for visitors to the woods or for future residents at the top of the hill, but perhaps this was a naively hopeful expectation.
The reality of what actually takes place during evictions of this nature is a disturbing reminder of what is required to create the “blank slate” necessary for more profit-oriented forms of development to take place.
This may lead some to wonder if the surplus time and energy required (to destroy organic communities and protect private profits) is really worthwhile. Whilst property owners, or aspiring property owners, may think it is, and their attitudes may be shared consciously or unconsciously by those who accept the norms of the dominant culture without question (as being somehow "the best of all possible worlds" or simply "our way of life"), those with different desires may beg to differ, as the poet and former Runnymede resident Ben Cheal explains on his blog.

While there have been some attempts recently to address the issue of land rights north of the border in Scotland, given the increasingly authoritarian nature of the current Conservative administration, it remains a challenge to put forward issues of land redistribution on a national level in the rest of the country. This is not to say that there aren't people active in those struggles however, merely that such activity so far remains very grassroots.
Prior to the creation of Diggers2012, for example, some of the chief protagonists had staged a one week occupation on part of Clapham Common in September 2011. Land and Freedom Camp, as it was called, was an attempt to highlight many of the same issues later raised by Diggers2012.
The temporary nature of the Land and Freedom Camp may offer a more endurable model for future land rights campaigns, one that would perhaps circumvent the trauma commonly associated with evictions. Of course, for those more interested in pursuing an alternative lifestyle than campaigning exclusively for land reform such a shift in tactics may require a larger adjustment as they are forced to adopt a more nomadic life. However this may turn out to be not without its own appeal. It is worth remembering that nomadic, hunter gatherer societies have often demonstrated a remarkable longevity and environmental sustainability compared with more settled civilisations.
One thing that becomes apparent with many fixed communities which come together in a spirit of protest is that the longer they persist the more the focus tends to shift over time, as different people come and go. This is less so in the case of occupied spaces like Faslane Peace Camp or Grow Heathrow, which have both maintained very clear campaign goals (against nuclear weapons and airport expansion respectively) over many years. In the case of more anarchic communities like Runnymede Eco Village its three year existence saw the focus of the community shift, as older members of Diggers2012 left and younger campaigners from the Love Activists group moved in.
The Love Activists have been specifically focused on the related issues of housing and homelessness, which has been exacerbated by PSPO's (Public Space Protection Orders, which are used by local councils to criminalise homelessness and begging) and increasing gentrification, both symptomatic of the short-sighted focus of many politicians who remain intent on catering to the disengaged prejudices of the middle and upper classes.
The Love Activists group first drew media attention for their short-lived occupation of an £80 million, grade 2 listed, offshore owned, former HSBC building in Charing Cross on 20th December 2014. This was part of their 'Homes Not Banks' campaign, a form of creative direct action intended to open the empty building up to the homeless of London for unconditional food and shelter. Undeterred by an eviction on Christmas Eve, they maintained a street kitchen on the pavement opposite the former bank well into the following January.
The “hippies” who are focused more on stepping out of mainstream society often remain a persistent presence throughout such long-running protest camps, based as they are around maintaining an alternative community, a model of the kind of egalitarian world many of us might rather build for ourselves given sufficient time and space. The same could be said for many of the artists and poets seeking the freedom to create in a space where the pressure of money no longer holds sway.
When the Runnymede Diggers were eventually evicted they carried the distinction of having maintained their peaceful occupation for twice as long as the historical Diggers of 1649. The group's community page on facebook had attracted over 1,800 likes and the community had a distinct culture of its own. While some evicted residents apparently held out in a disputed patch of woodland between the now enclosed, derelict campus site to the south and the National Trust-owned Runnymede Park to the north, other former residents have already hit the ground running.

The Four Seasons Community Cooperative, whose new community page attracted 136 likes in its first two days, held its first open meeting on Sunday 20th September 2015 at the newly occupied Oast House Adult Learning Centre in Staines, a council-owned property just along the River Thames which has apparently been empty for more than eight years. The current intention is to “pave the way toward a transition network” in the Staines area, and they have already launched a 38 Degrees community petition to Staines County Council, in an attempt to have the building they are presently occupying designated an Asset of Community Value.
Those keen on campaigning on the front lines for a fairer system of land rights and more affordable housing, as well as those simply seeking an alternative, more liberated and ecologically sustainable life, will most likely roll on, come what may, learning skills at each new occupation. What I find most inspiring is the practical DIY approach and respect for individual freedom and autonomy at work in these spaces, together with the awareness that despite the violence of the eviction, the spirit of Runnymede will very likely be carried far and wide, the seeds needing only a little bit of fertile ground to grow.
Anyone interested in learning more about the full spectrum of campaigns for a fairer and more sustainable distribution of land in the British Isles (or WISE Isles, if you will) may be interested in following the work of campaign groups like The Land Is Ours or the magazine The Land. 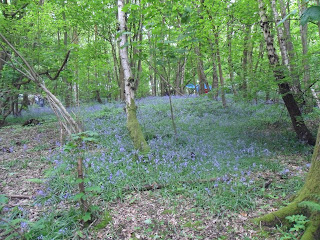