There's a few really good plants which pop up in the UK/WISE Isles around this time of the year which make really nice herbal teas. Strangely, these well known plants have often been maligned and ignored as weeds, but it is as pleasant and rewarding to go foraging for these plants in the springtime as it is to go blackberry picking in autumn. 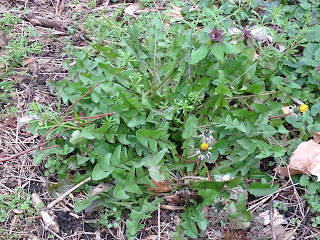 It's generally good advice to only pick stuff you can confidently identify. If you have any doubt, leave it. It's also good to avoid stuff that grows too close to the sides of roads, as they may contain more toxins. And wash everything before you consume it.

I took the picture above on Barnes Common, an area of west London which has remained beautifully underdeveloped on account of the land's marshy, flood-prone quality. While it has little value for property developers it maintains great value to the local ecology. The main plant in the photo is a dandelion, which has just begun to flower.

Now, its generally best to pick dandelion leaves before it flowers, as afterwards it can develop a more bitter flavour. Some people boil them for about 5-10 minutes to reduce the bitterness of raw dandelion leaves. The leaves make a nice peppery addition to salads, while the flowers, as rich in vitamin A and C as the leaves, can form the basis of herbal teas and even be brewed into dandelion wine. Later in the year the roots can be dug up, washed, dried, roasted and then grated up to create a caffeine-free coffee substitute. At present I mostly use the leaves.

I understand that if you take the fresh root as a tea it works particularly well for detoxifying the purifying the liver, kidneys, gall bladder and regular bladder.

The other plant you may be able to see in the photo are the long, thin leaves of the cleaver (or goosegrass), which is also called "sticky willy" because it has a velcro-like texture which probably helps it cling to the fur or feathers of birds and other animals. You can chew it fresh or drink it in hot or cold infusions, and it has a pleasantly refreshing flavour, as well as providing a rich source of natural vitamin C, as well as the same cleansing properties as dandelion. The seeds of the cleaver provide a coffee substitute.

The value of the wild plants that pop up in springtime are as cleansing, detoxifying agents, which means you may have to visit the toilet soon after drinking, so make sure you take precautions. This is why the ancient folk name for the dandelion was "piss-a-bed." 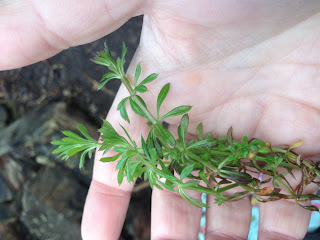 Some cleavers I picked during a wild food walk in Sipson

Related to my previous post on here, I wanted to share this powerful song by Muddy Summers & The Dirty Field Whores. It is filled with beautiful music and fiery lyrics, and has been recorded as a fundraiser for the more than twenty human beings who have been made homeless by the eviction of Yorkley Court Community Farm, to help them rebuild their homes and lives.

If you have the cash then do please click along to https://muddysummers.bandcamp.com/track/landgrabber-for-yccf and donate what you can.

If you don't have the cash you can still share the song with anyone you know who might enjoy it.

The need to reclaim the fields

So, Yorkley Court Community Farm, the land occupation down near Lydney in the Forest of Dean, is under siege. The possession order has finally been served, and the land rights activists involved have now apparently scattered into the surrounding woods.
Within the current framework of UK land law, this was all sadly inevitable, in spite of several instances of successful eviction resistance at the site over the last couple of years, it now seems that the prime movers will need to find a new site or fresh tactics for highlighting the gross inequalities of land distribution in England and Wales.
Sadly, I was never in a position to visit Yorkley Court. Now it seems I never will. So it goes.
One of the values of occupations like this is not necessarily their permanence or longevity, although undoubtedly more can be achieved within a given community over a longer time frame, nevertheless a feeling of permanence may inevitably run the risk of contributing to a sense of entrenchment both in membership and imagination, as members become more fixated on the day to day running of the space and less on challenging the dominant culture.
What matters is the example of another way.
This is as true of Yorkley Court as it was of other land occupations of the last five years or so, including some I have visited and reported on here and elsewhere such as the Hounslow Community Land Project and Runnymede Eco Village. Where else can people go to find ordinary women, children and men, no different from themselves, who have chosen instead of endlessly theorising or petitioning for a better and more equitable world, to create a working model in the here and now? By the very nature of their work they create a literal 'demonstration' of an alternative, more ecological and liberated future, that any visitor can bear witness to. Some passersby may be so inspired they even choose to become a part of it themselves.
I have little doubt that those who participate, at whatever level, in experiments such as this remain forever changed by the experience, their awareness of the relative strengths and weaknesses of this way and life informed by their own direct experience rather than any second-hand testimony such as this.
Posted by Russ McP at 05:37 No comments: