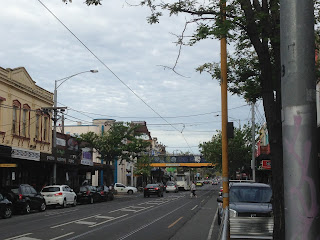 Whenever Jane and I visit the Melbourne suburb of St Kilda, I always feel at home. My brother-in-law lives in this area, and it is just down the road from Elwood where he and Jane grew up. I don't know if he was consciously looking to get back to his roots, but strangely it is my own roots in Ladbroke Grove that St Kilda reminds me of the most.
There are other elements that contribute to this beyond the presence of family. The architecture is more low-rise, but it is rooted in the same late-Victorian period. The local train service through this part of Melbourne is an overground service, just like the kind that runs through the part of west London where I spent my childhood.
This simple confluence of elements - of nineteenth century architecture and an overground train network - always makes this place feel familiar to me when stepping off the train at Balaclava station. There is also graffiti art everywhere, not unlike the kind I used to see around the Westway and Portobello Road areas (much of Melbourne and its suburbs are covered in graffiti, mostly by fairly skilled hands), and this once working class area has been subject to the same process of gentrification as I have seen in London. How many people around the world, I wonder, if you say "Notting Hill" to them immediately think of such bourgeois icons as Hugh Grant or David Cameron? The image of the area constructed over the last two decades does not describe the multicultural area I knew as a child, nor the working class slum known by a colleague of my dad who knew the area in the 1950s. 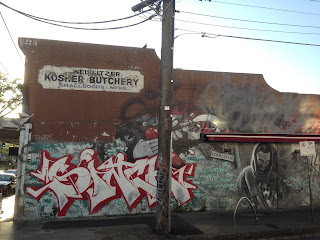 In many ways this is a description of the way random similarities can evoke a similar feel in otherwise disparate regions. There are obvious differences between Notting Hill and St Kilda, not least the latter's close proximity to the beach, the presence of the Melbourne tram network, a free community bus, backpackers hostels, ice addicts stumbling around the streets instead of winos, and the fact that one of the largest local communities is not Afro-Caribbean but Jewish. These are subtle differences, but they don't alter the curious manner in which, perhaps more than any other part of Australia I have seen so far, this area always feels to me the most strangely like home.
Why should this be? Why should I feel such familiarity for somewhere on the other side of the world?
It could be tied up to the way communities help shape places. The impressive new high rise architecture you find along the Yarra River likewise has a feel to me not unlike modern developments along the Thames here in London, or indeed those in cities like Dubai and Singapore. The feel of these landscapes understandably stems from their functionality, being designed for business and commerce rather than for people to live in, so naturally it is harder for individuals to put their own unique stamp on the character of an area.
The majesty of the new global riverside architecture is for me offset by a certain coldness, an aloofness which could be related to this very aspect of their nature. They are a spectacle, designed to draw people in and help them forget the mundane and messy landscapes of their ordinary lives and neighbourhoods, whilst forgetting that there is a beauty to the mundane and messy, and the landscapes that people make their own, etched with the lines of many daily struggles, over many years and lifetimes. (This is not to say that modern developments cannot be appropriated by ordinary people, as the skaters mecca along London's Southbank proves.)

What I experience in St Kilda is as much a feeling as a visual perception, tied up with my memories of the landscape of my childhood, which may be entirely separate from the reality of what that landscape has become, or is becoming. It is a nostalgia so subtle yet so specific that it can be evoked by the random assembly of elements in a city on the other side of the world.
Posted by Russ McP at 02:58 No comments: