About a year and a half ago Pevensey Road Nature Reserve, on the border between Hanworth (in the London Borough of Hounslow) and Heathfield (in the London Borough of Richmond) was so overgrown, its paths so ill-defined, that it was almost impossible to find a comfortable way through. It is still a spectacularly wild stretch of woodland, but over several months has been transformed (largely through the efforts of local volunteers), making its main pathway far easier to walk, and sunlight now able to reach low-growing plants. 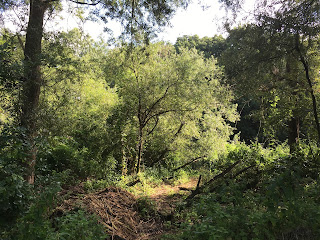 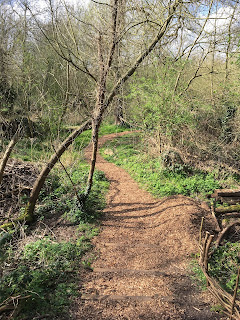 A "Green Gym" is held here most Mondays, where locals can get involved in maintaining this remarkable stretch of land which allows people to walk from Feltham to Hanworth Road through a landscape of relative tranquillity, away from the noise of some of the other main roads in the area. Hanworth Road itself is relatively busy, but a zebra crossing connects the walker from Pevensey Road Nature Reserve to Crane Park beyond. 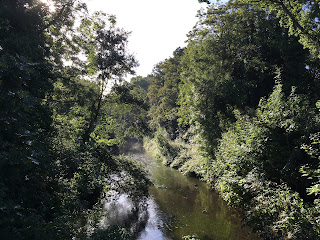 The River Crane, looking east from Hanworth Road at dawn

Crane Park is one of the most well-managed stretches of the whole Crane Valley. Its paths are wide and flanked by a cathedral of trees, home to a whole range of birds and wildlife. It is possible to walk the river on the north or the south side. On the north side of the Crane, the paths are tarmac and maintained by Richmond council, while on the south they are sandy but still good, and maintained by Hounslow council. The quality of the pathways makes this stretch of the Crane Valley the easiest for cyclists to ride too, although it is predominantly the preserve of dog walkers. 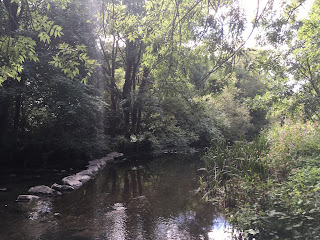 Sections of the park, such as the island at the centre, are maintained by London Wildlife Trust as a nature reserve. In other parts of Crane Park efforts have been made to restore a more natural character to the banks of the river (see above), reducing the effect of 'canalising' to create a better habitat for wildlife like water voles. 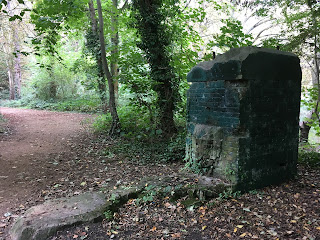 Just like at Donkey Woods, there are remnants of the areas' gunpowder industries on both the north and south side of the park. The picture above shows how much better this stretch of woodland is managed in comparison to the one taken at Donkey Woods that I used in Part 1 of this piece. 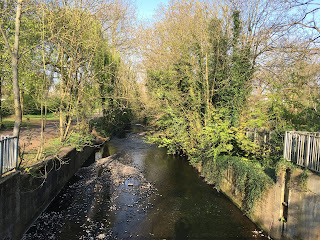 You can see the effects of 'canalising' as the river flows east. This photo was taken on the footbridge close to Mill Road, Twickenham. 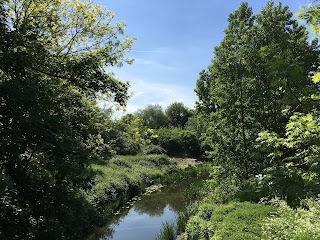 The Chertsey Road is a loud dual carriageway that slices up this beautiful stretch of wilderness much as the Great South West Road does further north. However, if you stick to the north side of the river while walking through Crane Park the two underpasses enable you to walk seamlessly from one side of the road to the other. The photo featured above was taken not far to the east of the Chertsey Road in late summer, and I hope goes some way to conveying what an oasis of tranquillity this region is once you allow yourself to walk mere yards from the road. 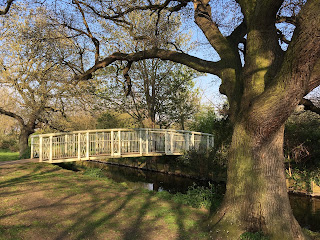 Crane Park narrows somewhat as you follow the river east to Twickenham, and after crossing a small road you soon arrive at Kneller Gardens. This fairly modest sized outdoor space has been incredibly well equipped in recent years with a children's playground, tennis courts, free outdoor gym, cafe with drinking fountain, lots of benches, and not one but two foot-bridges that take you across the river (see above), which bisects for the first time since the Duke of Northumberland's River joins the Crane at Donkey Woods.
I remember this area back in the 90s as something of a forgotten wasteland. In fact, it had once been allotments which had fallen into dis-use and been closed by the council. Today the land has been revived as Mereway Nature Reserve, with beautifully carved benches and an area of open wilderness that is far better managed than before. While you probably have about the same chance of seeing foxes darting through the fence to railway land as before, there is now a far greater chance of foraging for blackberries and rose hips which grow freely here than just nettles.
You can follow the river somewhat sporadically as it passes alongside the railway lines and along the side of the increasingly better landscaped paths that skirt the outskirts of the once quite empty Craneford Playing Fields, at which point you will have to make a somewhat wider diversion around the houses before you can reconnect with the river beyond the rapidly renovating Twickenham railway station. The final spot along the river where you can comfortably stop before it joins the Thames at Isleworth is at Moor Mead Gardens in St Margarets. 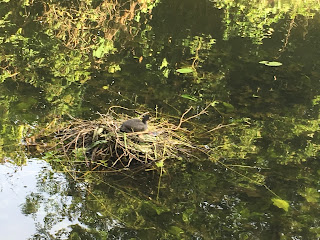 Life along the River Crane at Twickenham
Posted by Russ McP at 11:38