Just to the south of the Grand Union Canal's Paddington Branch and Bulls Bridge, running parallel to the busy Parkway dual carriageway, is a small unobtrusive river flanked by woods called the Crane. At various points along its journey its natural path has been altered by human development – through pollution and some canalising – and its identity is sometimes hard to determine, but it remains one of the most natural rivers in London. To the north of the Grand Union Canal the river which feeds the Crane is called Yeading Brook, which begins its journey in Harrow. 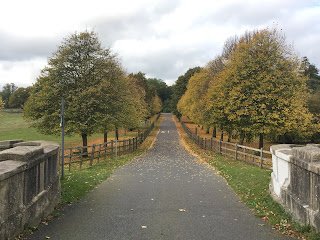 The entrance to Cranford Country Park in autumn,
viewed from the bridge over the River Crane
If you leave the busy Cranford Parkway Interchange on the south-west of the roundabout and take a small slip road tucked between the Parkway and the M4 motorway you will find the main entrance to Cranford Country Park, which technically is part of the neighbouring Borough of Hillingdon. At this point the river itself follows the boundary between the west London boroughs of Hounslow and Hillingdon, flanked by Avenue Park on the east side and Cranford Park on the west.
Nothing remains of the old manor house, the former residence of the Berkeley family, which was demolished in 1945. However within the grounds of the park you will find the small parish church of St Dunstan's, which dates from the 15th century and remains in use to this day. One quite notable thing about St Dunstan's, apart from its understated charm, is that it contains the interred ashes of the late comedy actor Tony Hancock. 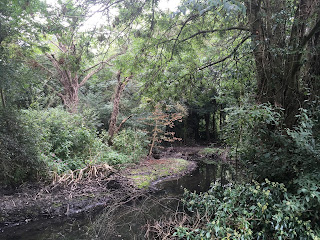 Along the banks of the River Crane, viewed from the Cranford Park side
Perhaps the most unfortunate thing that history has inflicted upon Cranford Park is that, with the construction of the M4 motorway in the late 1950s, this beautiful expanse of land was effectively sliced in two. A small underpass behind St Dunstan's called Dog Kennel Covert connects walkers and cyclists to the northern section, which tracks the Crane north to where it intersects with the Grand Union Canal, while the vast majority of the park lies to the south of the motorway. 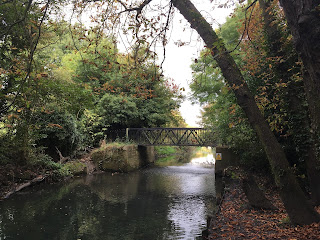 A footbridge over the River Crane, viewed from the Avenue Park side
It is this southern portion that makes for the most pleasant walking experience, with well maintained paths and a small iron footbridge which allows you to cross the river from Cranford Park to Avenue Park in neighbouring Hounslow. If you would prefer, you can follow the river quite easily as you walk south along the Hillingdon side, and as you walk you may catch sight of nuthatches and other small birds like the meadow pipit that have been spotted in this area, swooping across the wide open stretches beyond the thickly wooded section along the river itself. You may be more likely to see the giant metal birds taking off from the airport to the south west. 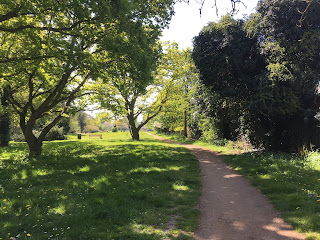 Berkeley Meadows in summer
A small road separates the broad expanse of Cranford Park from a smaller but perfectly formed park called Berkeley Meadows, which was once an area of marshy damp meadows used for grazing sheep and cattle, but which today has a good path, easy access to the river as it flows south, and a well maintained children's playground. It is now home to a wide range of wildlife including butterflies, birds, mammals and insects, and you may even glimpse the Kingfisher flying up and down the river.
Beyond here we encounter our first challenge to our Crane Valley walk in the form of Bath Road, a noisy dual carriageway which forces a small detour east to where there are traffic lights. I find the practical benefit of the shops and supermarkets in Cranford (Indian, Polish and Tesco) make up for the inconvenience of the noise and detour. 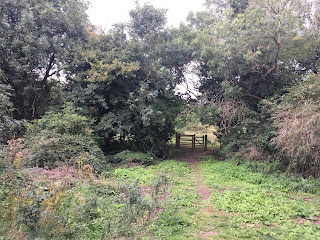 A path leads from the river to Huckersby Meadows in Cranford
Recent developments have made it difficult to access the Crane directly from Bath Road, so its necessary to cut through Waye Avenue, a circular suburban street with access to a playing field at the southern end. From this field you can cross another small iron bridge across the Crane to the newly opened Huckersby Meadows, which has been revived by the London Wildlife Trust from a former car park and wasteland into a large stretch of land where cows now graze.
Huckersby Meadows is bordered to its west by Heathrow Airport's Eastern Perimeter Road, so if you want to follow the Crane further south it is better to stay on the east side and follow the path through Cranebank Park. This is well maintained with benches and information boards about the local non-human inhabitants, and as you walk you find yourself entering an oasis of remarkable peace and tranqillity, bar the periodic aircraft passing overhead.
The abundance of natural flora and fauna comes as quite a surprise given the highly urbanised environment of Hounslow, so the fact that you can find here an environment supporting a range of mammals like foxes, rabbits, weasels, moles and bank voles is remarkable. The very best time to walk this stretch of the river is in the warm dry months from May to September, as the southern part of the land can be prone to flooding in winter. 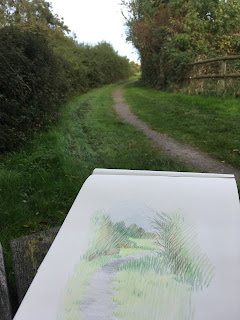 The benches along Cranebank make life easier for local artists
The Great South West Road presents the next challenge to anyone wanting to walk the Crane Valley in its entirety. It is a wide dual carriageway which also runs parallel to the Piccadilly line as tube trains briefly emerge into the light before reaching their final destination of Heathrow. The only way that presently exists to get to the south side of the road are traffic lights down at the junction with the A312 to the east. On the plus side it is worth reminding yourself that this is the most dramatic detour you will encounter throughout the whole of this route.
Having crossed the roaring danger of the Great South West Road you will be able to locate the Crane again by finding the entrance to the Causeway Nature Reserve beside an imposing advertising billboard. 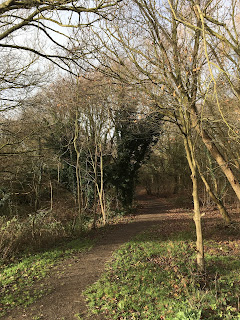 Winter sunlight through trees on the Causeway
The Causeway is a small but welcome respite from the surrounding roads and industrial estates of Hatton and North Feltham, a place where you can find damp-loving herbs such as Meadowsweet and Gipsywort growing amongst the grasses, and a cover for many small birds such as the blackcap or whitethroat.
Also, thanks to a well placed underpass, you can walk easily and safely south to the longer stretch of woodland which lies beyond known as Donkey Woods. Here you will encounter the first remnants of the local gunpowder industries that once filled the river with toxic pollutants. Just remember to wear your wellies. It can get muddy. Alternatively, as with Cranebank, you may wish to tackle it only in the warmer, dryer months of the year. 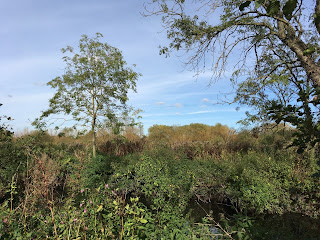 The northern section of Donkey Woods has a raised boardwalk to take you across the wettest, widest section of the River Crane, while the southern section is easier to walk throughout the year. It is here, in amongst often dense woodland, that you will find the remnants of Hounslow's gunpowder industries of the past, and where the Duke of Northumberland's river also intersects with the Crane. 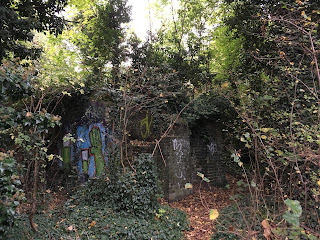 A remnant of one of the gunpowder factories,
now reclaimed by nature and local graffiti artists
When you reach Staines Road at the end of Donkey Woods a crossing to your right will take you safely across the street to the shops and petrol garage, and it is behind this petrol garage that the entrance to Brazil Mill Woods is partially concealed. 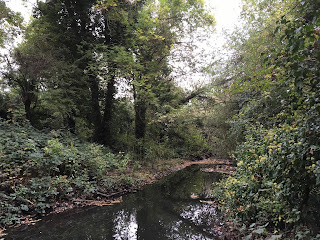 Brazil Mill Woods, shown here in autumn, is quite well concealed behind a petrol garage
This part of the Crane Valley is just as wild as Donkey Woods, but the path is on higher ground so less prone to muddiness or flooding. At one point the river divides to form an elongated island, with two points along the rivers' journey south where footbridges enable you to cross to the broad expanse of rugged scrub and woodland in Hounslow Heath. Many years ago the Heath once covered an even larger area than it does now.
Brazil Mill Woods is certainly well concealed. The first time I attempted to walk the Crane Valley I was convinced that this stretch of the river had fallen into disuse and been closed off from human traffic. This is partially because when the petrol garage on Staines Road is busy the north entrance is rendered almost invisible to passersby, while at the southern end the river and accompanying pathway disappears under a railway bridge connected to a short but very dark tunnel. 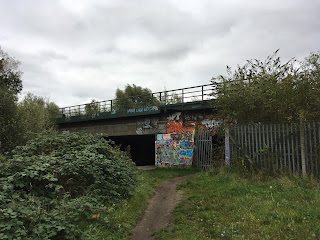 The gaping darkness of Cavalry Tunnel represents
more of an existential challenge to the walker than a physical one
Those brave enough to enter the darkness of Cavalry Tunnel will soon emerge into something of a post-apocalyptic wasteland, where rusting railway paraphernalia share space with abandoned home appliances, and high fences designating the boundaries of railway land from public land brutally slice up what has the potential to be a remarkable natural reserve.
This section of the Crane Valley is the least cared for. It reeks of the forgotten and unloved. However, the truly intrepid explorer who persists through thick bushes of blackberry, nettle, wild hawthorne, and countless empty cans of lager, will eventually be rewarded by their first sight of Pevensey Road Nature Reserve. Occupying the boundary of Hounslow and Richmond boroughs, this part of the Crane Valley has seen a lot of work by volunteers over the last year or two to improve paths and manage the woodland areas for the enjoyment of all. 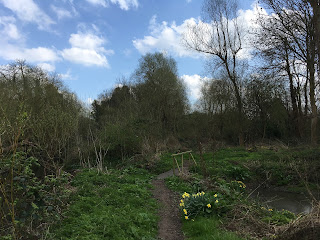 A small footbridge takes the walker across a tributary of the Crane
at Pevensey Nature Reserve
Posted by Russ McP at 04:10